FOV (Field of visualization) and its relation to treatment requirements in CBCT imaging.

CBCT imaging should always be conducted using protocols which are derived from specific indications of the case requiring investigation. It should provide the required clinical information to the clinician and have reduced radiation dose for the patient, along with being cost effective. The radiation dose is dictated by age of the patient and the anatomical region of interest (ROI). The field of visualization (FOV) needs to be tailored according to resolution requirements for the investigation and patient condition. These are the CBCT use recommendations after primary diagnosis by using intraoral radiography :

Intraoral or Periapical radiographs should be considered as the primary imaging modality of choice in the endodontic patient.

Small/Limited FOV CBCT should be considered as the imaging modality of choice for diagnosis in patients who present with contradictory or nonspecific clinical signs and symptoms associated with untreated or previously endodontically treated teeth.

Limited FOV CBCT is a focused scan covering only the region of interest, that is the concerned tooth under investigation and its supporting structures. It also minimizes the effective radiation dose to the patient.

A small or limited FOV CBCT (5x5 CM or 4x5 CM) should be considered for initial endodontic treatment because of its voxel properties. Voxel size is directly related to the spatial resolution of an image. Hence, the small FOV is selected due to increased resolution (highest possible resolution with smallest possible voxel size) to improve the diagnostic accuracy by visualization of small anatomical features like: 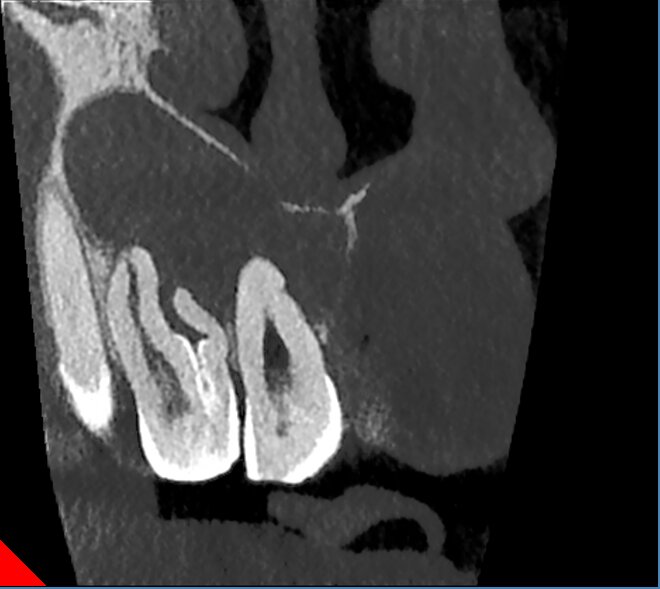 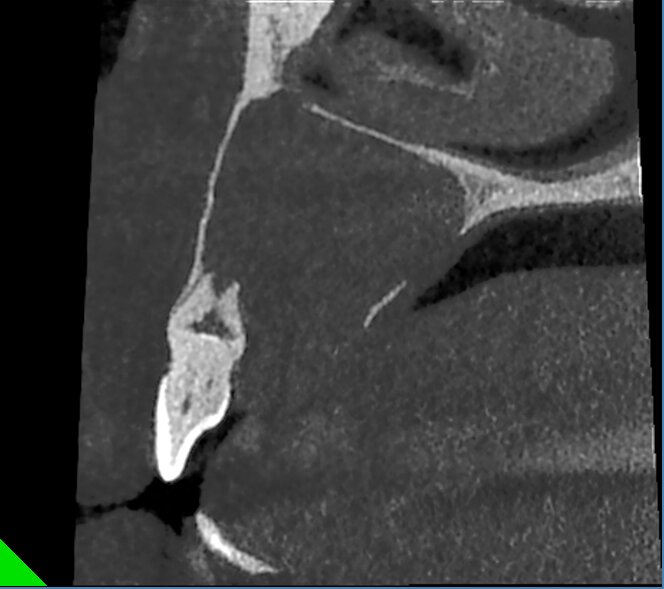 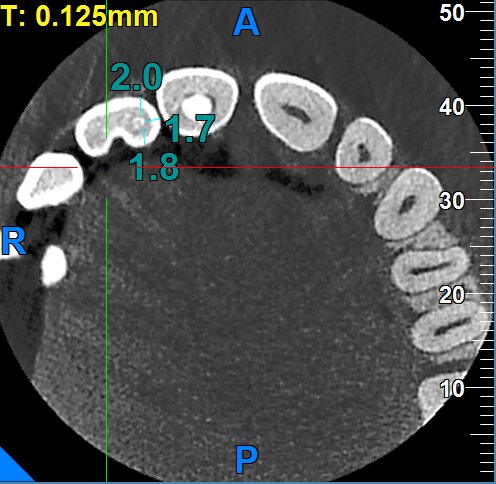 Coronal and cross sectional images at 125µm (limited FOV) showing a case of Dens invaginatus (Oehlers Type III) with 12 along with localized, expansile osteolytic lesion. The axial image shows location of the mesial canal orifice ir.t 12. The mesial canal is lined by enamel along the internal aspect till middle 3rd level.

It is recommended for a case which is currently in treatment without a prior CBCT investigation, and is suspected to have calcified/ missed canals or crown-root fracture. In such situation, a limited FOV CBCT should be considered for detection of such anatomical details or pathology which is not visualized on a periapical radiograph.

E.g. A voxel size of 0.2mm (200µm) or less is recommended to detect periapical pathosis.

When canals are identified but are difficult to negotiate due to calcification,a small FOV CBCT is useful to determine the extent of calcification and morphology of the canal so as to plan the further sequence of instrumentation for the treatment.

It can also help in cases with nonspecific pain by detection of root canal or furcal perforation; identification and location of fractured files/ instruments. The detection of these defects and choice of proper clinical therapy after proper assessment of clinical signs is important to determine a predictable treatment outcome and helps in the analysis of failures.

Cross sectional images at 90µm (limited FOV) showing 25 with divison of 2 closely placed canals into 2 separate canals in the apical 3rd region. A localized hyperdensity is noted at the start of the apical 3rd region suggestive of fractured instrument. Apical loss of lamina dura is noted suggestive of apical abscess. The apical lesion shows erosion of the cortical lining of the left maxillary sinus floor.

Intraoral radiography should be considered for immediate postoperative imaging. However, in the presence of nonspecific clinical signs in endodontically treated teeth as discussed earlier, a limited FOV CBCT is recommended. This could be helpful to determine a change in the course of the treatment or the need for further treatment. 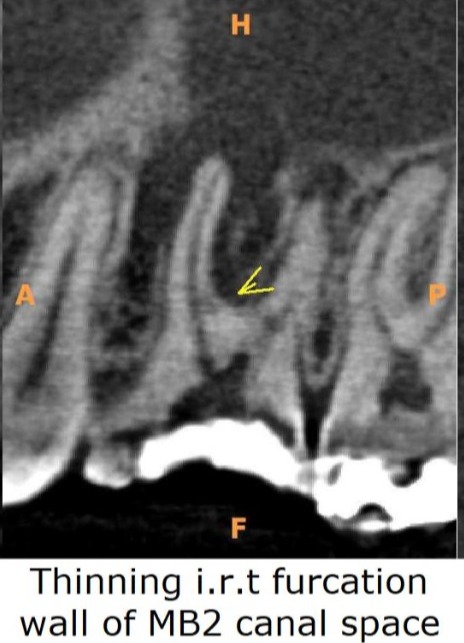 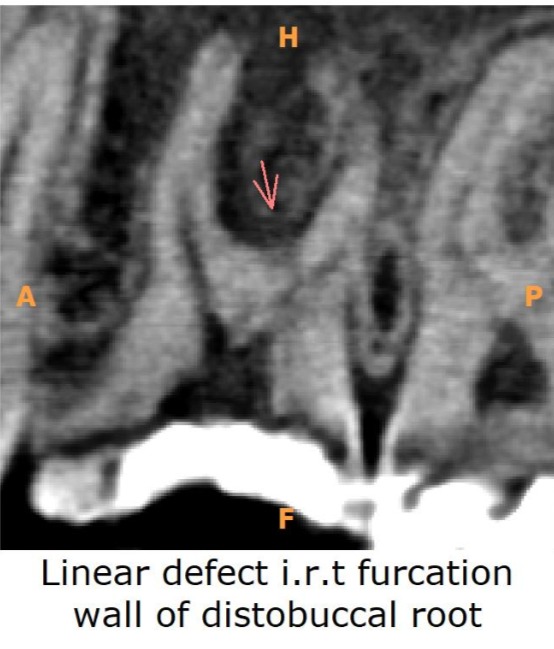 Limited FOV CBCT should be considered if the clinical examination and intraoral radiographs are inconclusive in the detection of vertical/ horizontal crown- root fracture. Resolution of less than 200µm is recommended for detection of root fractures.

Limited FOV CBCT should be used to evaluate the non-healing of previous endodontic treatment to help determine the need for further treatment (i.e, nonsurgical, surgical, or extraction with or without replacement of tooth)

Limited FOV CBCT should be considered for presurgical treatment planning to localize root apex/apices and to evaluate proximity to adjacent anatomical structures like nasal floor, maxillary sinus floor with the maxilla; or inferior alveolar canal/ mental canal with the mandible. This is particularly important in case selection of periapical lesions i.r.t maxillary molar teeth in which the maxillary sinus floor is involved. Similarly, periapical lesions involving the inferior alveolar canal can be detected on CBCT along with determination of the size and extent of the lesion; involvement or perforation of the cortex/ cortices.

Limited FOV CBCT should be considered for surgical placement of implants. A resolution of 250µm or less is considered to be sufficient. . Similarly, this resolution is applicable for diagnostic studies related to postoperative complications after implant surgery which includes postoperative neurosensory impairment, acute rhino-sinusitis and implant mobility. CBCT should not be used for periodic assessments of postoperative asymptomatic dental implants.

Sagittal sections and cross sections at 90µm showing bone loss and defect involving the buccal and lingual cortices with the alveolar process i.r.t the implant with 34.

Limited FOV CBCT should be considered for diagnosis and management of limited dentoalveolar trauma, root fractures, luxation, and/or displacement of teeth and localized dentoalveolar trauma in the absence of other maxillofacial or soft tissue injury that required advance imaging modalities. The exact location and extent of the fracture line can be determined along with its relation/ effect on the supporting structures. As discussed earlier a resolution of less than 200µm is recommended for detection of suspected root fractures in cases of isolated dental trauma.

Limited FOV CBCT should be used in the localization and differentiation of external and internal resorptive defects and to determine the appropriate treatment and prognosis.The detection of the resorptive defect is also influenced by its size and location along the length of the root. Its location in the cervical 3rd/ middle 3rd/ apical 3rd affects its defection on the CBCT images. A voxel size of 200µm is able to detect resorptive lesions (external) in the cervical and middle 3rd region of the radicular portion.

A voxel size of 0.15mm (150µm) is found to show the optimal sensitivity for detailed diagnosis of internal or external resorptive defects and perforations.

Limited FOV CBCT should be used in the assessment of furcation involvement, localization and identification of periodontal bone defects, fenestration and dehiscence. The recommended voxel size is up to 0.15mm (150µm).

Limited FOV to cover the nasomaxillary complex and visualize the cleft defect and nasal cavity. Recommended voxel size is 0.3mm (300µm) or larger since radiation exposure needs to be reduced in such investigations conducted on growing children.

Cleft palate : Axial and Coronal sections at 250µm showing unilateral cleft palate defect involving the left maxilla. Note obliteration of the left inferior meatus and turbinate due to extension of the defect into the nasal fossa.

CBCT is found to be better in detecting osseous changes like flattening, osteophyte formation and erosion, as compared to MRI. Limited FOV CBCT producing high resolution images has been found to be excellent for visualized of osseous changes within the TMJ. Voxel size of less than 0.2mm (200µm) are found to be optimal for the detection of temporomandibular joint erosions. Larger FOVs producing voxel sizes between 200-400µm can cover both the TMJs. However, larger FOVs generate larger voxels, which generate images with decreased resolution, which may compromise the ability to detect early osseous changes in degenerative disease involving the TMJ.

In clinical practice, the above discussed factors are also influenced by the presence of other variables like metallic dental fillings, scatter related to presence of implants, metal plates, soft tissue and other artifact producing entities. Patient movement during the scan acquisition can cause motion artifacts, double images and displacements within the imaged volume. Recently introduced imaging systems apply correction algorithms to minimize shading and streaking artefacts ; however, the ability of such corrections is limited resulting in loss of important details.

Hence, careful selection of FOV as per treatment requirements needs to carried out in cases with history of dental restorations and prosthesis. These measures accompanied with patient stabilization using positioning aids can help prevent formation of image artifacts.

The Impact of Cone Beam Computed Tomography in Endodontics: A New Era in Diagnosis and Treatment Planning; SPRING 2018 ENDODONTICS: Colleagues for excellence newsletter.